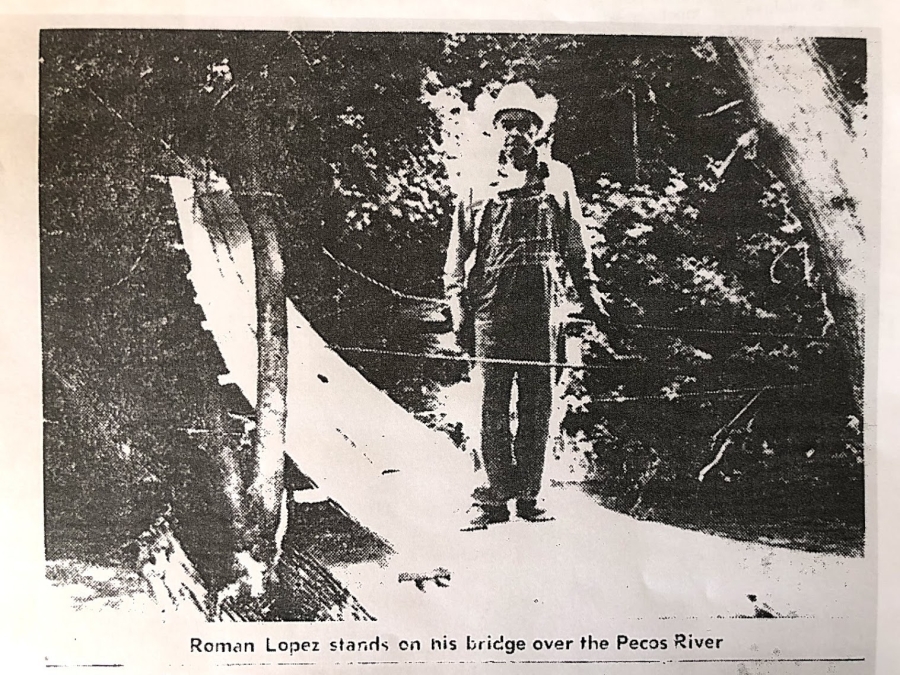 He died years before I was born, yet the words of a small town reporter give me a colorful piece of his life.

It’s a reminder for me, as a journalist, that even the most simple stories and anecdotes that I may consider inconsequential may have the potential to reverberate for someone far into the future.

After navigating the microfilm archives at New Mexico Highlands University a couple of weeks ago (with help of course), I finally found the image of my great grandfather standing before a simple footbridge he built over the Pecos River not long before he died.

The image is splotchy, in black and white, yet the words describing this simple man with a simple idea are so colorful, I can almost feel the warmth of the sun that day he was visited by a reporter from the Las Vegas Optic back in 1973.

Here’s that article in full:

He eagerly and easily maneuvers down the twisting steep path along the bank to his bridge. Then with the agility of a teenager, he climbs up the board plank ladder and steps onto the suspension bridge which he says took him about two weeks to construct.

The short, grey-haired man perches precariously against one of the cable handrails, however he seems “at home” there as when standing on the banks of the Pecos River. He points to a spot on the north bank where a garden is being tenderly cared for and where an apple orchard grows. If you look closely you can see some adobe ruins and he says he was born there 85 years ago.

Roman Lopez is the oldest resident of San Jose and has the distinction of being the village bridge builder, too. However instead of enjoying his comfortable home in the village, Roman spends his summers at a two-room house he built three years ago. Most of the time he will be found in back of the dwelling, down by the Pecos river, usually tending one of his gardens.

One of the best garden spots, he says, is down across the river on land owned by his nephew Gabriel Gallegos. Years ago, there had been an old foot-bridge across the Pecos there and if you were fleet of foot and blessed with balance, you could make it across without having to take the road which fords the river, about one mile downstream.

Roman explains that the road isn’t always reliable and when the water is high, it becomes impassable. “I’d been thinking about building a bridge for a long time,” Roman says. Then when the material became available from his son-in-law, Adolfo Blea, and help was offered by his nephew, Gabriel, his plans took shape early in May. After two weeks of steady work, the Pecos was spanned by a nearly 36-foot long cable-suspension bridge, about which Roman says, “will last longer than me.”

Roman built the bridge when the water was high, and people who come to view the structure constantly wonder how it was built without anyone getting in the water. Roman then explains how he took twine, threw it from the north to the south bank of the river, and then ran the first cables across with it. “We lost a lot of twine,” Roman admits. “That was the hardest job – to get it across at first.”

After the first two cables were secure, Roman began laying flooring boards. Stooping down to sit on the bridge, he shows how he pushed planks from one end of the bridge to the other, using the leverage of his legs and feet. He tells how his foot once got caught between two boards and how he almost fell into the swollen river.

In May, when Roman was building the structure, the Pecos, now about 10 feet below the bottom of the bridge was nearly up to the flooring. It was the most water in the river since 1904, Roman said, and it helped him decide that this was the year to build the bridge.

When the 2×4 and 2×3 planks were in place, they were fastened with crossboards. Support wires were added and two handhold cables were strung. After two weeks, the work was finished, and the first bridge he had ever built spanned the Pecos.

Roman says he has more plans for strengthening the bridge, which may include adding support beams sunk deep in the bed of the Pecos River. He plans to add more support wires and may even put chicken wire down from the hand cables to the floorboards for additional security.

Roman’s grandchildren who live nearby dash merrily across the bridge and bring their busy grandfather something to drink. Roman’s business and love for the outdoors is explained by his daughter Louise Blea who says “He was a rancher for years and just can’t stay cooped up inside.”

The old man walks confidently across his bridge back to the other side of the river giving an offering hand to those not so used to the sway of the structure.

Although he speaks just a little English, and you may speak only a little Spanish, his broad smile and nod tells all; he is proud and pleased that you have come to see his bridge.