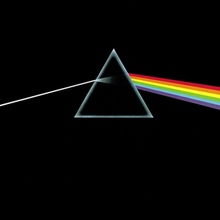 Much has been written about the Dark Side of the Moon album over its 45 year history. There is likely no other album that continues to be dissected and analyzed for its genius and significant influence.

Here is my piece about the album that had an everlasting influence on my taste in music. Call it a love note, if you wish. I adore every track.

The first time I listened to the entire album was sometime around 1992. At age 13, I was bored and alone at home going through my father’s CDs. I heard a couple of tracks already and was a little familiar with two or three of the songs. Money. Time.

I put in the CD into our player, put on some headphones, laid down and hit play. Little did I know this would be the beginning of an intense infatuation with all things Pink Floyd.

Describing how music can compel certain imagery and emotions is sometimes futile, especially since we each experience music in our own subjective and abstract ways. But I’ll try for a second.

Once the first track Speak to Me transitioned to On the Run, I was instantly transported into a different place as electronic sounds and the stereo effect flowed back and forth between my ears and consciousness.

The spacey sounds coupled with the airport announcement voices painted one hell of an image on black canvass. This is art that compels the subconscious to produce images in concert with sound. It’s one hell of an internal light show.

At this moment I fell in love with electronic music. When I play the album today in the same manner, the same images and feelings flood back across a black plane just as they did when I had a moment with music.

So here’s to you Dark Side of the Moon. Thanks for showing me the light!